Tourist places in and around Udaipur that you must explore - Travel Blog by Fern Hotels & Resorts
288
post-template-default,single,single-post,postid-288,single-format-standard,qode-social-login-1.0,qode-restaurant-1.0,woocommerce-no-js,ajax_fade,page_not_loaded,,select-theme-ver-4.4,wpb-js-composer js-comp-ver-5.4.7,vc_responsive 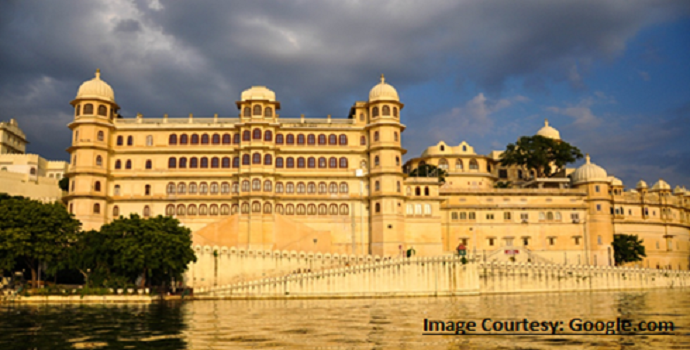 Tourist places in and around Udaipur that you must explore

Udaipur was the historic capital of the kingdom of Mewar in erstwhile Rajputana. It was founded by Maharana Udai Singh of the Sisodia clan in 1553. It is now a very popular tourist as well as wedding destination known worldwide for its rich history, culture, exotic locations and magnificent forts and palaces. The beautiful Lake Pichola, with the majestic Aravalli Hills acting as the backdrop sets a perfect ambience for romance. Infact it has also been called as ‘the most romantic spot on the continent of India’. The marvellous palaces and monuments and a tranquil boat ride on the Lake Pichola are indeed an experience of a lifetime. Udaipur still has the old markets that sell unique and ancient art forms that one can take home as souveneirs of their wonderful visit to this beautiful city. If you are planning a visit to this romantic destination and looking for hotels near Udaipur airport or hotels in Udaipur near Lake Pichola, then one of the best options for you could be The Fern Residency, Udaipur. The hotel has created a niche for itself with its impeccable service standards, serene ambience and remarkable views of the Lake Pichola.

To make your trip a memorable one, here is a list of few places that you should not forget to visit in Udaipur even if you are on a business or a leisure trip.

The City Palace in Udaipur was built over a period of nearly 400 years by several rulers of the Mewar dynasty. The construction of this beautiful palace began in 1553. It is located on the east bank of the Lake Pichola and is indeed a sight to behold. The architecture of the City Palace is a fusion of the Rajasthani and Mughal architectural styles. A major section of the palace is now open to public as a museum which has extravagant rooms, paintings and centuries old collection of artifacts; it does keep its visitors awestruck. The tranquil and large Lake Pichola is one of the main attractions in Udaipur. This beautiful lake reflects the majestic Aravalli Mountains on its rippling and crystal clear waters. It is an artificial fresh water lake, created by the royalty in the year 1362 AD by flooding the nearby Picholi village, hence the name. A boat trip on this centuries old lake could be an experience of a lifetime and if you have the company of your beloved it will definitely be a moment you would cherish forever. The Jag Mandir palace built on an island in the Lake Pichola is a wonderful architectural marvel. The construction of the palace started in 1551 and was completed by 1652. The royal family used the palace as a summer resort and pleasure palace. It is also called the “Lake Garden Palace”. The mere sight of the magnificent palace surrounded by waters is magical.

The Monsoon Palace, also known as the Sajjan Garh Palace, is a hilltop palatial residence that overlooks the Fateh Sagar Lake. It is named Sajjangarh after Maharana Sajjan Singh (1874–1884) of the Mewar Dynasty, who built it in 1884. Due to its location, the palace offers a panoramic view of the city’s lakes, palaces and surrounding countryside. It was built by the king to watch the monsoon clouds; hence the name Monsoon Palace. If you want to watch remarkable views of the setting sun, then it is one place you should visit.

If you are a lover of ancient architecture and monuments then Udaipur will amuse you with its many palaces and castles. There are many more temples, lakes, gardens and markets which will definitely require you to travel with some time in hand. It is advisable that you plan your trip beforehand and choose hotels in Udaipur near Lake Pichola for a true royal,memorable experience and to create memories that you can cherish for a lifetime.